How many times have you submitted a proposal and then never heard from your prospect again? Or worse, learned that the project was awarded to someone else because your price was too high?

If either of these is a common occurrence, you’re probably wasting valuable time writing proposals you will never win. The only solution is to learn how to distinguish the viable prospects from the deadbeats before you agree to write anything. And that means you have to find out what the prospect’s budget is.

But that’s a problem, because either you’re afraid to ask, or you ask and the response you get is useless. Either way, you’re back to square one. That’s the moment to do something different.

Discovering a prospect’s budget isn’t that complicated; it just requires some creativity and persistence. It’s one more business communication skill you can learn if you want to save yourself time and, more important, anxiety.

After being in business for six years, Ashleigh Hansberger and Sunny Bonnell of Myrtle Beach, South Carolina-based Motto Agency have learned that skill. “Proposal writing can be a huge waste of time,” Hansberger says. “We learned to talk more and write less, and to agree on cost verbally before we put it in writing.”

Broaching the subject of money as early in the process as possible puts you in the driver’s seat. It positions you as the professional you are, planting the seeds for the client to trust they’re in good hands. It also allows you to weed out inappropriate candidates. Your goal in the first conversation is to determine whether you can provide what they need and, if so, whether it would be a profitable project for you.

Asking directly for the prospect’s budget should be one of many basic questions you ask to achieve that goal. It’s no different from “What is your timeframe?” or “What is your objective with this project?” This may seem obvious, but many people neglect to ask this basic question. (Some creative professionals don’t address money at all, so when they go to bill the project, they find themselves in a bit of a pickle.)

In the best-case scenario, and especially if you’re talking to a corporate professional, your prospect will simply tell you their budget. Big-company clients don’t take any of this personally, as many small-business owners do. They know you need to know, and they don’t want to waste their time reviewing a proposal that doesn’t work within their budget.

Here are a few phrases to try:

“What budget have you allocated for this project?” The construction of this question presumes they have allocated a budget.

“What do you have in mind to spend?”

“What can you afford?”

If they reply, “I don’t know”—meaning, someone else has established a budget but your contact doesn’t know what it is—they may be looking for you to tell them how much the project should cost (you are, after all, the expert here). If you sense this could be a viable project, it’s worth probing to make sure you’re at least in the same ballpark.

However, you should consider certain responses to be red flags, such as: “I don’t have much to spend,” or “We don’t really have a budget.” Those answers signify that you should push to get a number before the end of the conversation so you can decide whether or not to pursue the work. You can say:

“If you’re looking for the most inexpensive designer, I’m not your best option. Can you give me a general idea of what you can afford?” 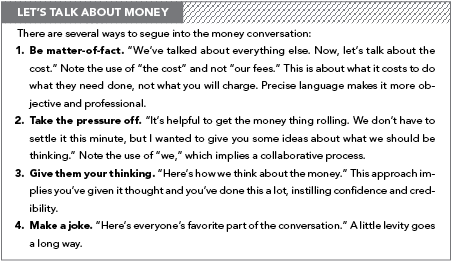 Just because a prospect says they don’t know their budget doesn’t mean you can’t find out what they’re thinking of spending. Call on your creativity: Throw out some round numbers to see how they react. As soon as there are numbers on the table, people tend to respond, even when they claim not to know. Start with:

Giving them a wide range, even if they didn’t know their budget, will trigger a response such as “Well, we don’t have $20,000, but somewhere in the middle could work.” This gives you something to start with.

If they say, “Well, $2,000 would be ideal but we probably couldn’t go higher than $5,000,” then you know to outline in your proposal (if you decide to pursue the project) what they can get within that range. This alone will save you time estimating higher or proposing services they don’t need or can’t afford. You may worry that when you throw out numbers, the client will automatically choose your lowest. Not so. Good prospects know that the lowest price indicates low quality. If they affirm the low number, that may be your cue to walk away.

Plus, at this point you’re just trying to gauge budget—you’re not quoting a price—so be sure to let your prospect know that these numbers are not yet firm.

All of this back and forth should be done in real time, either on the phone or in person, so you maintain control over the conversation. Asking these questions via e-mail doesn’t give you the opportunity to see or hear their reactions and respond accordingly, and is therefore much less effective. When someone e-mails you to ask for your price on a project, call them immediately or reply via e-mail with a request for a phone meeting to discuss their needs. Unless you don’t want the job, don’t respond via e-mail with numbers.

Sometimes, no matter how you ask or how creatively you probe, the prospect won’t reveal their budget. One alternative is a mini-proposal. You can say:

“OK, I understand you can’t provide the budget. So I’m going to work up some numbers and a brief scope of work, and then present it to you before doing a full-fledged proposal. If the numbers work, I’ll go ahead. If not, I won’t.”

This mini-proposal can be as short as a paragraph or as long as a page. It should include a recap of what you discussed with general price ranges. Think “executive summary,” and make it easy to skim, with an emphasis on bullets and lists. The mini-proposal lays out a price that the prospect can respond to, without taking too much of your time to prepare.

This process of getting the budget isn’t easy for most creative professionals, but it does get easier once you’ve learned the art (and it is an art) of finessing questions that will uncover the information you need. It’s a worthwhile habit to develop. And it’s your responsibility to yourself as a business owner, whether a solopreneur or an agency owner, not to waste time writing proposals that you never get, just because a prospect doesn’t know or won’t share their budget.

To run a successful practice, you have to be a clear communicator, especially when it comes to money. Some prospects may not be willing to share the numbers when you ask, and you risk annoying them if you push too far. But the more you welcome these exchanges and learn how to communicate more clearly, the stronger your financial footing will be.

Put this into practice and you’ll submit fewer proposals, but all of them will be legitimate. The result: less time with tire-kickers and more time with serious opportunities.

Ilise Benun, founder of Marketing Mentor and co-producer of the Creative Freelancer Conference, works with creative freelancers who are serious about building healthy businesses. Sign up for her Quick Tips at www.marketing-mentortips.com.

Excerpted from the July 2011 issue of HOW magazine. Used with the kind permission of HOW magazine, a publication of F+W Media, Inc. Visit www.howdesign.com to subscribe.