Inspired by the Color Field school, the Fauves, and Bay Area painters, Timothy Mulligan paints the vivid colors of California.

Half a dozen years ago, Timothy Mulligan traveled to San Francisco to see “Birth of Impressionism: Masterpieces from the Musée d’Orsay,” the first of two consecutive exhibitions at the de Young Museum. It was a rare opportunity to see a collection of roughly 100 paintings by the masters of Impressionism. “It sparked a real desire in me to be a contemporary Impressionist painter,” Mulligan says, and it set him on the path to a flourishing midlife career, painting and amplifying the vivid colors that surround him.

Mulligan had earned a bachelor’s degree in art from California State University in Sacramento years earlier, but he’d set aside his art career in order to teach his two children at home.

The exhibition on Impressionism inspired him to take up painting again. “I was fascinated by the artists’ letters and notes — reading Monet’s account of his excitement over capturing the movement of grass beneath the surface of the water. Or about Monet and Renoir traveling to sites along the Seine to paint together. I wanted to become an artist who painted in an Impressionist style.”

While the influence of Impressionism is perceptible in Mulligan’s early paintings, it’s the work of more contemporary artists that resonated with his desire to paint his visual experience. His subjects — city neighborhoods and the natural landscape — demanded a more expressive language.

“For some reason, my mind and my arm had difficulty painting a completely impressionistic painting,” Mulligan says. “I always wanted to include a section with a different style, and those sections were usually what I loved the most. They felt more contemporary, more me … I began adding sections to my paintings in a style influenced by the artists of the Bay Area Figurative Movement. One of these was Richard Diebenkorn, whose paintings seemed shockingly real and semiabstract at the same time. I began using bolder paint strokes, altering the texture of paint, simplifying shapes and minimizing the information.”

In capturing the northern California light, Mulligan is mindful of how the Impressionists “painted the light” — thick layers of saturated color in a bright tonal range, with broken brushstrokes to mimic the experience of seeing. “I use color in an intuitive manner, but I’m also aware of the color relationships. I try to use what I’ve learned about the effects of colors from the Color Field artists and the Fauves. I’ll intensify and alter the color of an object to capture an emotional response to that object … Today my paintings are expressive in style with northern California color, what I would call a ‘raw’ style.”

Mulligan began showing his work in local art competitions and winning awards. In 2015, he had a solo gallery exhibition; since then, his painting career has continued to follow an upward trajectory. Mulligan approaches his art with a sense of urgency, painting almost every day to keep up with upcoming shows. He doesn’t want to forget the techniques he
has learned through experimentation.

“Fifty percent of painting is playful experimentation,” Mulligan says. He spends a good deal of time planning his paintings. Walking, climbing, or kayaking to an area, he’ll make sketches and notes and take hundreds of reference photos. He finalizes the sketches in the studio, then makes a quick outline on the canvas with a brush and orange paint.

If painting en plein air, Mulligan can usually complete smaller paintings in one sitting. “The shifting light is always a struggle,” he says. “Usually I have a plan in my head and some ideas about composition. I try to capture the light and shadows at the most interesting time.”

Making the Most of Acrylics

Mulligan’s  larger paintings are done in his studio because the fast-drying acrylics he uses require him to work in sections. Mulligan set up his studio in his home and opted for acrylic paint to avoid the fumes associated with oil paint. Since he paints alla prima, acrylics can make that method more of a challenge.

“When I found that Chroma Atelier Interactive Artists’ Acrylics can be rehydrated with a spray bottle to extend the working time, they seemed the perfect match for me,” he says. “I can spend up to three and a half hours per session, enough time to adjust my colors and experiment with texture. I sometimes lose some color complexity due to extended wet-into-wet painting (blending). Yet I appreciate having time to experiment with thick linear movements, marbling, and color combinations.”

Mulligan doesn’t use painting mediums or glossy finishes; the saturated color of the acrylic pigments alone seems to make the colors in his paintings bolder and brighter. He uses painting knives, tools that he believes lend themselves to expression more so than brushes do. “Painting in acrylics with knives is like juggling balls and falling through the air at the same time,” he says. “But these knives give me the freedom to be creative and the ability to paint delicate, rough and everything in-between.”

The years since Mulligan reclaimed his painting practice have been an intense period. He has evolved both as an artist and in the way he views art. “I strive to capture a different and deeper sense of real,” he says. “The way I view a painting now is different from the way I looked at a painting before. I used to see it only as a beautiful end product. Now I see each brushstroke being considered, each color carefully selected, the complex process of creating a view of the world. Sometimes you can see the hand of the artist working and moving on the canvas.”

“To people like me, who didn’t pursue art at first but discovered their passion later in life, it’s never too late. Don’t ever give up on your dreams.”

The Bay Area Figurative Movement (1950s – 1960s) was led by a group of artists in the San Francisco Bay Area. These artists abandoned the nonobjectivity of Abstract Expressionism in favor of a return to figuration. Artists include David Park, Elmer Bischoff, Richard Diebenkorn and Wayne Thiebaud.

Color Field artists, such as Barnett Newman, developed an American-based abstract style during the 1940s – 1960s that was characterized by large areas of unmodulated color.

Fauves (from the French for “wild beasts”) were avant-garde artists of the early 20th century who aimed to evoke an emotional response in viewers. The work emphasized vivid and often discordant color, simplified and unified forms, and painterly brushstrokes. Artists include Henri Matisse, André Derain, Raoul Dufy and Georges Braque.

In his own words, Timothy Mulligan walks us through his process of creating linear movement in his painting Cargo Ship, W. Sac, below.

Linear movement, achieved through edges, texture and the juxtaposition of shapes and color has several functions in my work, as seen in Cargo Ship, W. Sac., below. It directs the eye through sections of a painting. To convey how I feel about or interpret the subject, I create expressive lines, such as the vertical impasto ridges in the details.

Detail A: By simplifying the image — reducing the clutter — the lines allow me to strengthen the composition.

Detail B: Lines also help me to redefine form, shape and movement, such as the reflections in the water.

The overall effect of linear movement is to create more interest. In the full view of Cargo Ship, W. Sac., above, for example, the contrast of the three-dimensional impasto to the flat, two-dimensional surface attracts the viewer’s eye. With an overhead light catching the ridges of paint, as seen in details A and B, the picture becomes more dynamic.

TIMOTHY MULLIGAN received a bachelor of arts degree in fine art from California State University, Sacramento. His paintings have appeared in Southwest Art and International Artist, and he was a finalist in The Artist’s Magazine’s 30th, 32nd and 33rd Annual Art Competitions. In 2015, Alex Bult, the grandson of Wayne Thiebaud, gave Mulligan his first solo exhibition, “Raw, Real & Reimagined,” at the Alex Bult Gallery (Sacramento, Calif). Elliott Fouts Gallery (Sacramento, Calif.), held a solo exhibition of his work in June 2017. Visit Mulligan’s website at timothymulliganfineart.com.

JUDITH FAIRLY writes about the visual arts and is a frequent contributor to Artist’s Magazine, in which a version of this article first appeared. 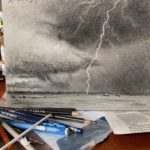 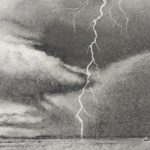 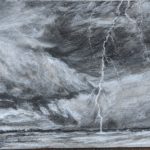 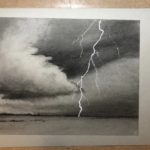 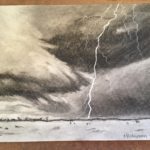 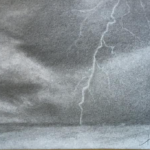