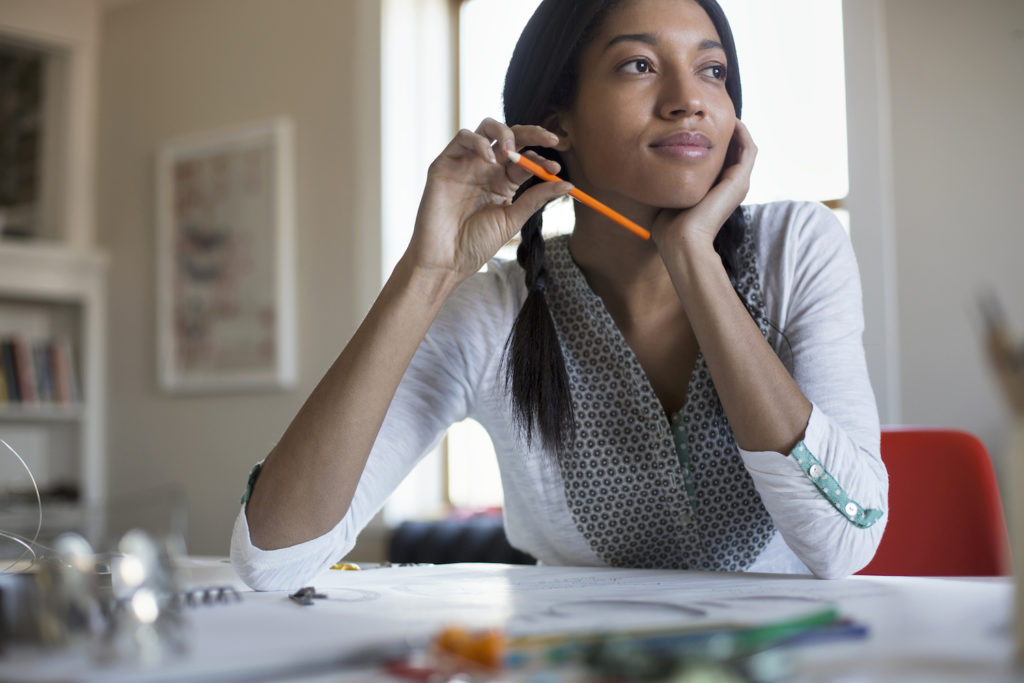 We’ve all faced the creative block at one point or another. It can be a challenge to push yourself and try new things. In Keys to Drawing with Imagination by Bert Dodson, you can learn tons of great strategies and exercises for creative thinking.

The 10th-anniversary edition of the book is packed with 192 pages of content. And, below we’ve excerpted four strategies from this book on practicing creative thinking:

Drawing expressively is all about finding ways of intensifying and dramatizing your subjects to inspire a new emotion in your viewer. An accurately drawn object puts the viewer in touch with that object on a literal level — they automatically know exactly what it is and what it’s used for.

An exaggerated or distorted drawing of the same object tends to touch the viewer on an emotional level, inviting them to see it in a new way. It makes the familiar strange.

Progressive change: Here’s a demonstration of how distortion gets easier when you do it in stages. I like to do it in groups of three. Here the first umpire was drawn from a magazine photograph. The middle stage exaggerated the action and altered the proportions. This emboldened me to make more radical changes in the last drawing.

We recognize differences by comparing and contrasting. If you want to make something look big in your drawing, put it next to something small. If you have only one object, the parts should contrast with each other.

Enlarging some parts of your subject while reducing others is a way of intensifying the drawing. It creates an exaggerated emphasis, expressively calling attention to certain aspects of a person or animal. The results may be amusing or disturbing, but almost always attention-getting.

Differences are information. We are aware of things because they stand out from their background. One way to make the familiar strange is to emphasize differences. That is, put two elements in a drawing and push the differences between them to extremes.

1 – This drawing is a sketch I made of two guys waiting in an airport. Something about the difference between their poses and body types caught my eye.
2 – Later I made a second sketch from the original. I exaggerated the differences between the two figures, making the heavier man much larger and the thinner guy more angular and bookish. For some reason they began to look like monuments to me. I imagined them as a stone sculpture in the park.
3 – So I drew them again, this time in pencil. By using soft shading and eliminating details, I attempted to show them as if they were made of granite. And I added pigeons.

Sometimes it’s fun to make a composite drawing from different sources and to wildly exaggerate size differences. Here I’ve put the artist Gustave Courbet in the driver’s seat of socialite Gaby Deslys’ limousine. The drawing is arresting because it almost takes a moment for the viewer to realize that Courbet is a giant.

Many artists — even experienced professionals — find it difficult to deliberately distort their drawings. Paradoxically, good training in observation can inhibit the ability to draw expressively. I have a two-step process that can help you break out of that constraint. It almost guarantees a more extreme and often striking image.

In the first step, drawing blind, map the basic outlines of your subject with a bold, black marker. As you draw, keep your eyes on the subject (or photograph) and not on your drawing. You may need to cheat a little by glancing at your paper from time to time to keep your place.

When you have completed this contour map, shift to a ball-point pen and begin carefully filling in shading and details, now freely looking back and forth between subject and paper. The natural distortion that occurs when you draw blindly ensures that no amount of realistic shading will make your drawing look exact.

I love blind contour drawings. My friends and I will do blind drawings of each other or fictional characters. It’s always a blast to relax and blindly sketch a character then laugh at the result. Try these four strategies for creative thinking this week and see what inspires you.

You can find even more strategies and exercises to help with creative thinking in Keys to Drawing with Imagination. It’s available at the Artists Network Shop, on Amazon and wherever books are sold. Grab your copy today!