Author and artist Claudia Nice (www.brightwoodstudio.com) has published numerous instructional art books. The following excerpt appeared in The Artist’s Magazine (September 2011), and comes from Drawing and Painting Trees in the Landscape. Scroll down to learn her tips for drawing conifers, as well as to get the scoop on her three new DVDs for artists (including Texture Drawing Basics). ~Cherie 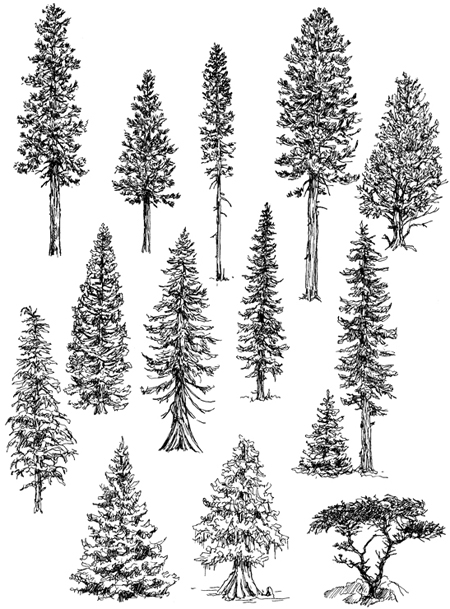 Convincing Conifers: How to Draw Trees by Claudia Nice

Since most pencil and pen drawings are finished in tones of gray and black, the most important factors in creating a good representation are line and tonal contrast. The mark or line made by the drawing tool is responsible for defining the edge and overall shape of the tree, its roughness or smoothness, and its stance or movement. How dark the mark is and how close the lines are drawn together are responsible for creating contrast in value–the relative gray and black tones in the drawing. It’s the value contrast that lends the drawing a three-dimensional appearance, by describing the tree’s modeling shadows, cast shadows, and surface texture.

Sometimes referred to as softwoods or evergreens, conifers are trees with needles or scale-like leaves. Although most of them retain their leaves year-round, a few, such as the larch and tamarack, turn golden and drop their needles in late fall. The foliage-bearing part (the crown) of the conifer is usually somewhat cone-shaped. However, the angle and spread of the limbs and the shape of the trunk can vary greatly from species to species. Scribble lines work well to suggest the texture of trees at a distance in the background.

Before putting pencil to paper, begin by studying your tree. How tall is it? What is the shape of its outer perimeter? Do the branches reach skyward, stretch horizontally, or do they droop toward the ground? Is the trunk straight or curved? Study the young California red fir in the photograph (below). Then use the following steps to draw a simple conifer.

1. Pencil in the trunk. Start by lightly penciling in the height and shape of the trunk. This sapling bows slightly to the right.

2. Sketch the crown. Lightly pencil in the general shape of the tree’s crown. Note how far it extends down the trunk. Use pencil lines to mark where the main branches are. Notice that not all of the branches extend to the outer edge of the crown. The branches that extend to the front are indicated as a line (A) that straddles across the trunk.

3. Fill in the foliage. Drape the branches with scribbly patches of foliage, marking the shadow areas a little more heavily. Erase the trunk and branch guidelines as you work, except where they cross open areas. For a softer look, use a paper stump or tortillion to blend the foliage areas. ~CN

And here’s some great news–Claudia Nice has just come out with three new DVDs! Click the following links to see which is right for you.