The world of sketchbooks and art journals is a colorful, varied, and inspiring one. We interview 11 artists to discover the ways they keep themselves creative by working in their sketchbooks, what sketching techniques they vouch for and the tools and materials they keep at hand.

If your passion for drawing is ignited after looking through the pages of these sketchbooks, turn to your own and get inspired by the techniques and visions of 10 more inspiring artists in  Artist’s Sketchbook!!

John Belardo is a sculptor, draftsman, instructor at Lehman College and president of the Hudson Valley Art Association. Going to museums and drawing from sculptures, copying works by Michelangelo and other artists of the Renaissance, Mannerist and Baroque eras is what he uses his sketchbook for most of all.

His needs are few when it comes to materials to put his sketching techniques to work. Just a 4B pencil with eraser attached to the end does him fine. “The reason I use a 4B is that I can get a very soft line and get as dark as I need,” Belardo says. “I’m never shading or looking for large areas of tone. With me it’s all about a controlled, rational line.”

He also tapes a piece of sandpaper to the back of his sketchbook for sharpening his pencil—this way he never needs to carry a knife or portable sharpener.

He advises his students to use a sketchbook to further their own understanding of concepts such as form and light—and not to be worried about how the finished drawing will look to others. When Belardo is drawing in his sketchbook his intention is “not to produce a pretty drawing; it’s meant to make an honest drawing.”

Thomas Cian is an artist based in Milan, Italy. Sketching is an “anytime, anywhere” pursuit for him, especially when traveling.

He works with assorted ink pens and hardcover sketchbooks but no graphite at all. Cian says that ink “helps me be more sure of what I’m doing” than pencil.

His sketching techniques always start with making sure that his journal or sketchbook has paper that works well with his preferred media. “Heavy paper is more versatile, since it lets you operate with many different techniques,” the artist says. “For example it’s capable of holding water, and it doesn’t let ink soak through to the other side of the sheet.” 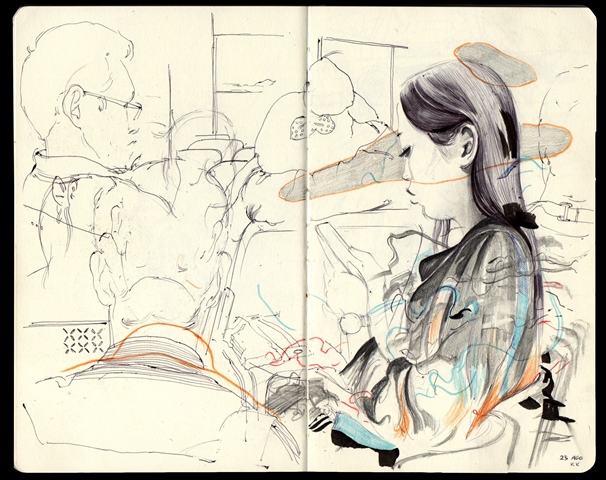 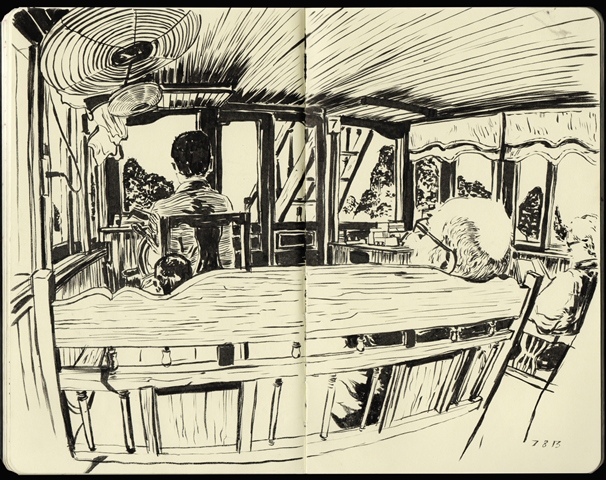 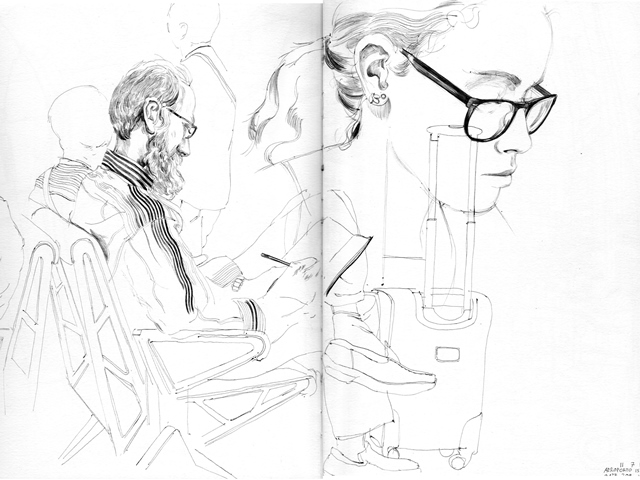 Gary Faigin is a Seattle-based artist and the co-founder and artistic director of Gage Academy of Art. For him, sketching means developing concepts for paintings, drawing from imagination, and sketching people he sees around him, for instance on public transportation, in church, and at coffee shops.

He plays with lots of drawing tools, including all manner of pens, pencils and inks, such as Higgins’ sepia ink.

He extols the virtues of trying to work within certain strictures in terms of style or subject matter. “The worst thing is to not have any boundaries—too much freedom can be debilitating,” Faigin says.

“You work best if you create a rulebook where you can do this but can’t do that. Having strict rules that you can invent within frees you up to think, ‘What can I do within those limitations?’ You don’t have to reinvent the wheel with every painting; you can tweak it, try new combinations within your limits.”

Faigin notes this strategy has been adopted by many artists. “Hopper did the same sort of urban interiors for 30 years. Morandi painted the same groups of still lifes for 40 years. And they’re among the greats. They did it all within this limited range.”

Virginia Hein is a Los Angeles artist and instructor. She uses sketchbooks for observations of sites around her home city area, plus what she calls “high-speed passenger sketches” showing views from moving cars.

She likes variety in her tools. Hein might have the most diverse toolbox of all the artists we communicated with. She uses pencils, colored pencil, fountain pens, calligraphy pens and watercolors. She draws in books from manufacturers including Hand-Book, Moleskine and Stillman & Birn.

The sketching techniques that she uses most often have to do with movement. When in an urban area, she starts by drawing whatever is moving, such as people, animals and cars. Once those are complete, Hein points out you can more fully render things like buildings and scenery. But be careful, because even if your subject isn’t moving, the sunlight is, so you need to work fast to capture the scene before the light changes.

Hein stresses the importance of not being too hard on yourself. “The biggest enemy is self-criticism,” she says. “It can be paralyzing. One of the great things about a sketching is that you can draw something every day, and if you think it’s bad, just move on. And even a bad sketch can have a good detail or give you a sense of time and place. There’s always something to be learned, even from epic fails.”

James McElhinney is an artist, author, instructor and oral historian based in New York. Several of the journal paintings shown here  are also featured in the book Art Students League of New York on Painting, which he co-authored and edited.

McElhinney is unique in that he creates journal paintings—complete, panoramic works through which he interprets the world around him.

He recommends beginning with a linear drawing in pen, then moving to a painting stage, perhaps in watercolor. This can produce an intriguing push-pull between the linear and painted aspects of the work.

He advises artists to make social media a part of their sketching practice because, as he sees it, artwork created in journals, books and sketchbooks is ripe for sharing via those platforms. “Through social media I can have an immediate dialogue with an audience, rather than doing paintings that have to go in frames and hang in exhibitions,” he says. “These books have kind of become my analogue handheld device.”

Elizabeth Osborne is a painter based in Philadelphia. She brings out her sketchbook mostly for depicting plein air landscapes, often created when she is traveling though she will occasionally create a floral or botanical study.

If you’re drawing or painting the landscape, Osborne advises to try to work early or late in the day, when there will be more contrast, which may reveal the most visually interesting tableaux. 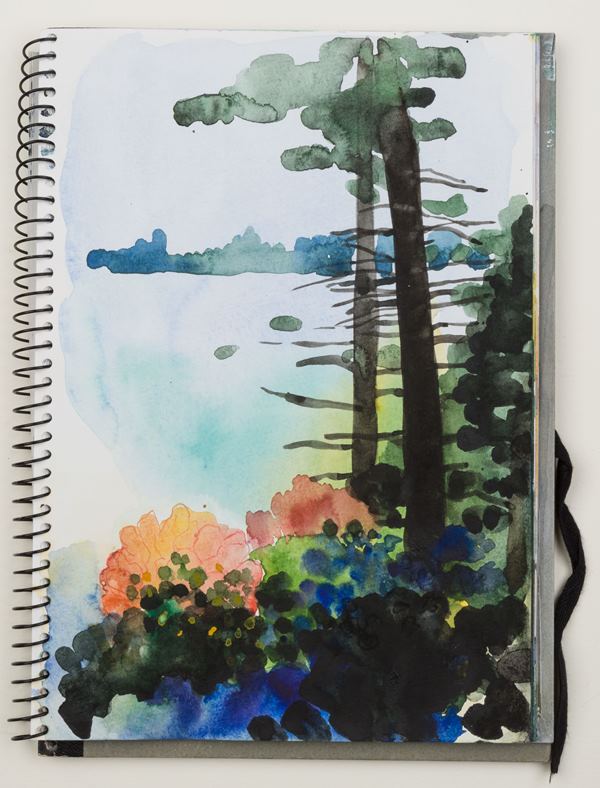 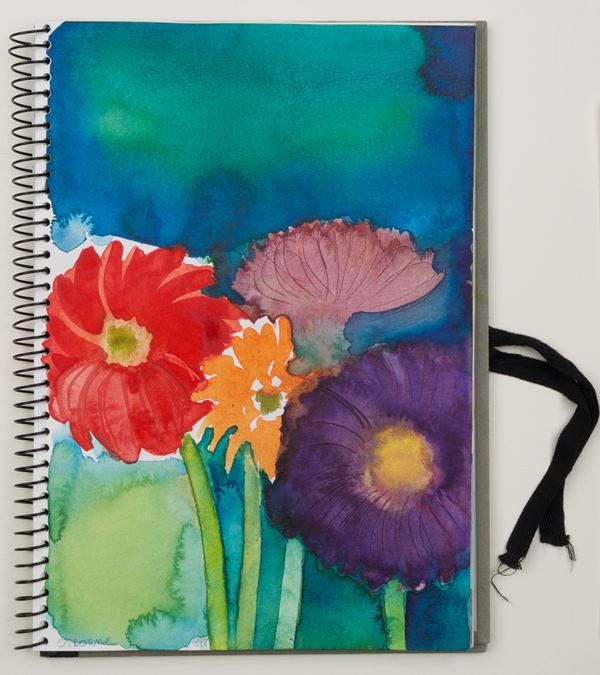 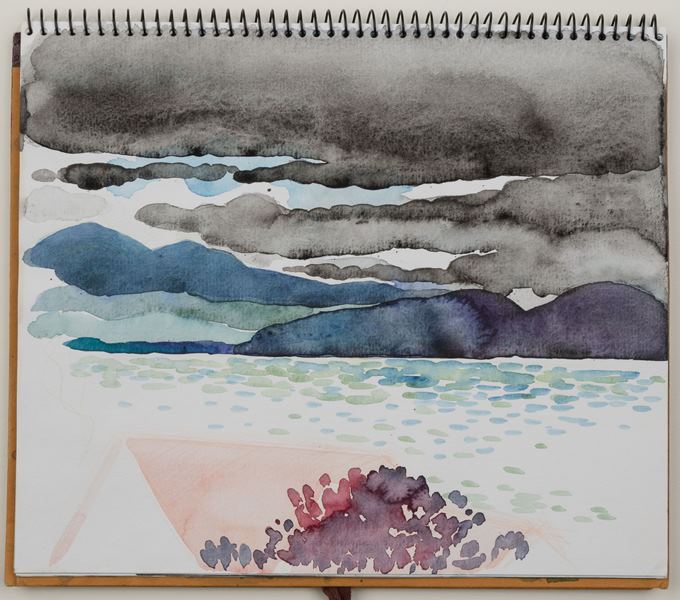 Matt Rota is an illustrator, artist and instructor based in New York. His sketchbook showcase his profession, as he creates, tests and refines ideas for editorial illustrations. He has other books set aside for personal work, including images for narrative projects he is developing.

His tools include a very fine Speedball Crow Quill pen, along with assorted pencils, and Canson XL drawing pads. 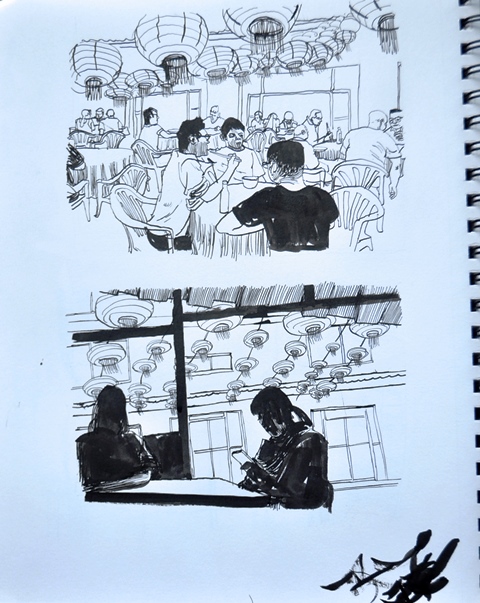 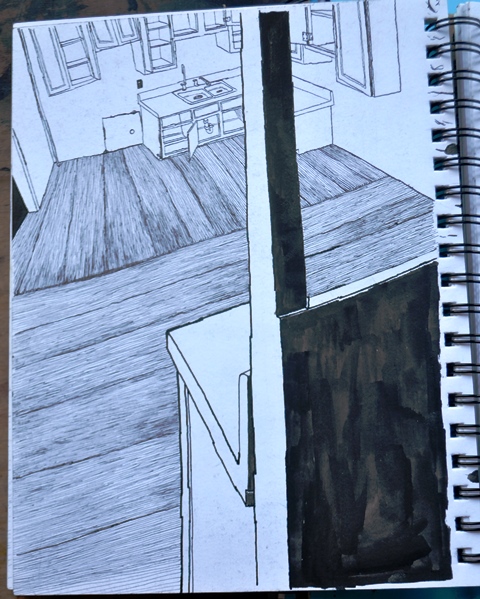 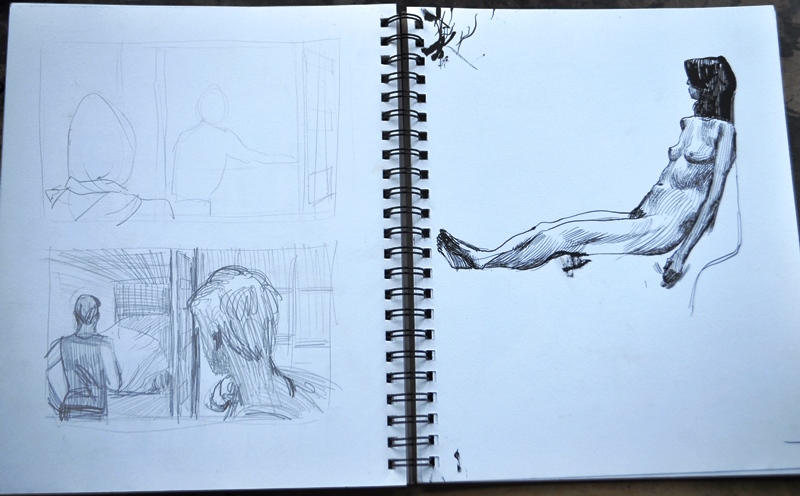 Josef Rubinstein is a draftsman, painter and comic book artist. He uses his sketchbooks predominately for life drawing. He sketches with mechanical pencils with 0.7mm HB lead, 2B wood pencils, powdered graphite, chalks, and charcoal and his bound sketchbooks have smooth paper in them.

He suggests that beginners start with a quick gestural drawing showing who your subject is and how he or she sits on the page. Hold off on the darkest darks until the late stages of the drawing.

He also says that having a goal for every drawing can really make the difference. “It’s not enough to just want to get better,” Rubinstein says. “What’s your individual drawing about? Rendering? Chiaroscuro? If you have a problem with proportion, forget about doing a finished drawing and just work on that.”

In California, Edwin Ushiro is an artist and illustrator. “The main purpose of my sketchbook is to record the present time,” Ushiro says. “A lot of my work deals with the past, so it’s kind of nice to also be recording the present. I always carry my sketchbooks around, and in a sense they become my visual diaries.”

The sketching tools and materials he uses end up being whatever is handy, which often including markers. For his surface, Ushiro frequently uses Moleskine notebooks.

The only technique he recommends is no rules. “It’s a sketchbook—there should be freedom!” Ushiro says. “You need to remind yourself that it’s only for you. It’s OK to make mistakes. If a drawing isn’t starting off good, just see where it will go.” 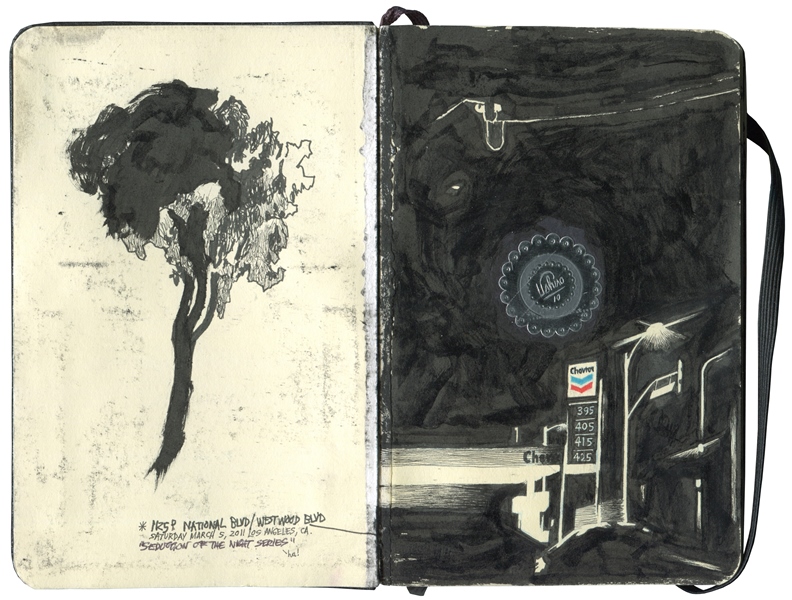 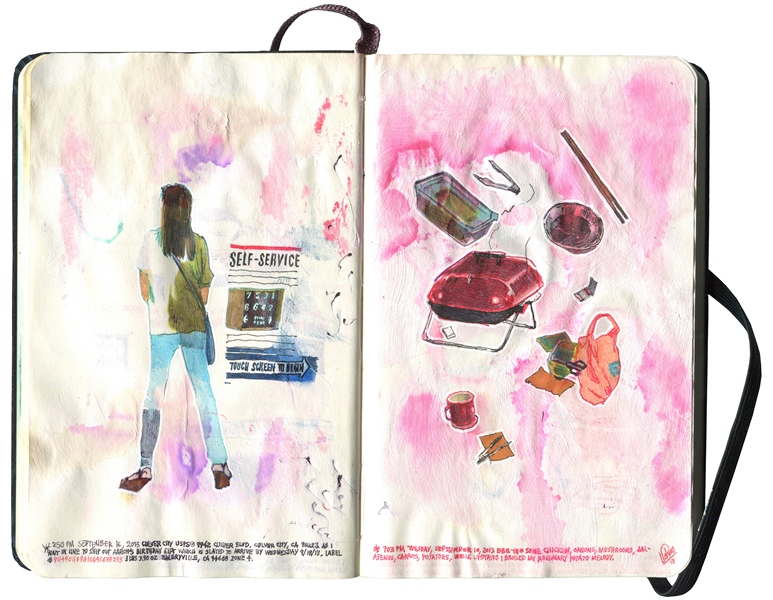 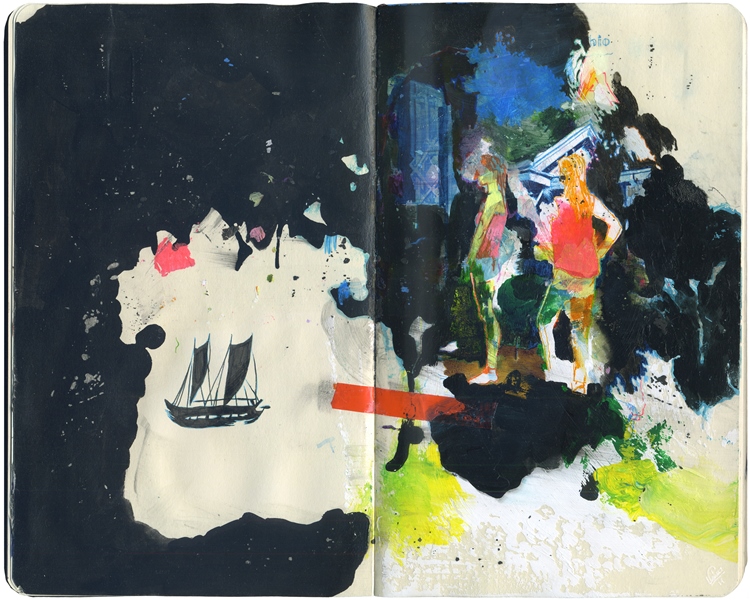 Every artist who keeps a travel sketchbook is inspired wherever they go! Spark your creativity with the techniques from Urban Sketching: Drawing & Painting in a Travel Journal video download!