Sadie J. Valeri creates oil painting still lifes from a limited palette, starting with a grisaille underpainting. She teaches this process in workshops and classes at Sadie Valeri Atelier in San Francisco. This article by Michael Lacoy first appeared in the October 2011 issue of The Artist’s Magazine.

Creating an original still life painting is a daunting task. The genre has been a favorite with artists for centuries and, as a result, museums and galleries are filled with paintings of flowers, fruits and other by-now overly familiar objects. Sadie Valeri’s response to this is to combine traditional subject matter—pitchers, shells, bottles—with a contemporary material not normally associated with fine art: wax paper. “I was drawn to the material because I could twist and crush the transparent paper to create dynamic environments for the antique bottles and pitchers I collect,” she says. Valeri has produced a series of works featuring wax paper, for which she’s received impressive critical acclaim. Her painting Bottle Collection (above) won first prize in the still life category at the 2009–2010 Art Renewal Center International Salon. For Valeri, success has been the result of diligent study combined with a creative approach to classic methods.

Now based in San Francisco, where she runs the Sadie Valeri Atelier, the artist grew up outside of Boston. She remembers drawing obsessively as a child and hearing the often-asked question of her classmates at school (spoken, as Valeri tells it, in their thick New England accents): “Ahh you going to be an ahh-tist when you grow up?” With the encouragement of her high school art teacher and the support of her family, Valeri went on to the Rhode Island School of Design (RISD), where she majored in illustration.

Valeri excelled at RISD but felt unsure about her prospects upon graduation. “What stymied me most as a young artist leaving art school was the question of what to paint. The possibilities are endless in the postmodern era and, frankly, I was overwhelmed by the thought that my choice of subject had to be particularly clever to be noticed.” For the next 10 years, Valeri worked as a graphic and Web designer and made no art of her own except for work done in life-drawing groups.

But Valeri’s discovery of the contemporary classical realist movement inspired her to dust off her paints and brushes. She took workshops with a number of the biggest names in the field, including Ted Seth Jacobs, Michael Grimaldi, Juliette Aristides, and Tim Stotz and Nicole Michelle Tully of Studio Escalier in France. She also learned the basics of traditional Flemish layered painting technique from Kirstine Reiner. “After an intense period of taking workshops and constantly practicing what I was learning, I felt the urge to create something more than a study, something of my own,” says Valeri. Working out of her home, where space was limited, Valeri decided to focus on still lifes.

“I just arranged things I found visually compelling. I didn’t think about whether anyone else would like them.” From these beginnings her Wax Paper Series was born. 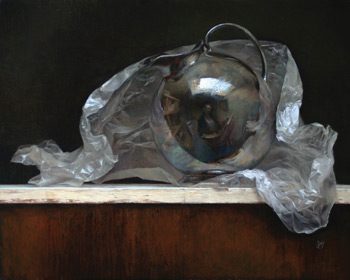 “In a rare instance, I included a self-portrait in Silver Globe Pitcher (oil, 16×20),” says Valeri. ”The viewer can see my entire little studio and get a glimpse into the experience of the painter.

Valeri’s approach to painting is straightforward. “I paint realistic light effects supported by a structural analysis of form,” she says. Combining an impressionist’s sensitivity to color with an engineer’s grasp of function allows her to “unlock the beauty of the objects” she paints. The artist does her visual analysis through drawing—her favorite part of the painting process—which allows her to “study every form, reverse-engineer all the shapes and analyze the behavior of the light.” She adds, “I like to understand why the curved, graceful handle of a cup or pitcher looks firm enough to grasp for pouring and never looks soft or floppy.” This close observation is the key to her paintings’ convincing realism.

Setting up is the important first step in Valeri’s still life painting process. “Since I’ll be spending a month or more staring at the subject, I like to be sure that I love it before I begin,” she says. The setup can take days as she carefully arranges and rearranges the various objects into a harmonious, visually pleasing composition. She’s drawn to challenging and eye-engaging surfaces, “from the opalescent interior of a seashell to translucent papers twisted into crushed spirals.”

Once satisfied with her setup, Valeri spends a few days working on a detailed contour drawing. “I’ve found,” she says, “that the more care I take with the drawing, the more time I save in later stages of the painting.” Working on frosted Mylar (a high-quality tracing paper), Valeri doesn’t worry about shading her drawing, concentrating instead on composition, proportion and structure.

She transfers the completed drawing onto a primed wood panel but then refines the lines, reducing their width with a pen-style (retractable) eraser. In this way, she eliminates what she describes as the “dead, traced quality” of the lines. Finally, Valeri seals the drawing onto the panel with a coat of damar varnish thinned with odorless mineral spirits. “This protects the drawing,” she says, “and also creates an ideal painting surface: not too thirsty, not too slick.”

With her drawing resolved and her support fully prepared, Valeri is ready to start painting. She works under natural north light and begins with two grisaille underpaintings. Using only burnt umber, the artist lays in the basic values of her composition, leaving bare the white areas of the panel for the light areas of the painting; this process is called “open grisaille.” The next step—the “closed grisaille”—involves creating a string of six or seven values, from black to white, mixed from burnt umber, ultramarine blue and a small amount of flake white. Using these mixtures, Valeri paints a full-value rendering of her subject. “I often bring this monochromatic version of the painting to a high finish with two or more layers, using small brushes.”

Opaque Color With a Limited Palette

Having completed her grisaille underpaintings, the artist moves into full color. Her goal at this stage is not to simply embellish the grisaille with color, as that would “merely give the look of a tinted black-and-white photograph.” Instead, Valeri works mostly with opaque color until the very last stages, using the underpainting as a guide to help her match the values she’s already worked out. “True color is saturated (high chroma) in the midtones and desaturated (low chroma) in the lightest lights and darkest shadows,” she says. “This is what transforms a monochromatic painting into full color, and that transformation is only possible with opaque color layers completely covering the grisaille underpainting.”

Valeri uses a limited palette: “just a few primaries and a couple of secondaries plus flake white, in both transparent and opaque pigments.” With these pigments she mixes additional strings of color that correspond to the value transitions she sees on a given object. “I always paint in small, distinct tiles (areas), working from the shadows up into the lights,” she says. “I work just one small area at a time up to the highest finish possible and leave that area to dry for a couple of days while I work on other areas of the painting.” For the final stages of the painting, Valeri uses “fairly transparent paint, sometimes as glazes, to make subtle adjustments to the colors set in earlier layers.”

Time Is On Her Side

Valeri’s painting process is detailed and time-consuming. A small (9×12 or 11×14) still life requires roughly a month of work from initial drawing to finished painting. “When I teach my process to students, they’re sometimes mystified as to why we go through all the different steps and stages; painting directly seems easier to them,” she says. “It’s at the end of the process, when there are ah-has all around the studio as students achieve levels of realism they never thought they were capable of, that they start to understand how powerful this process can be.”

Michael Lacoy is an artist, writer and editor living in Cambridge, Massachusetts.