When it comes to learning how to draw people, start simple to ensure success. And what is simpler than drawing armatures? They are almost like glorified stick figures!

When you stop worrying about getting the proportions of the torso and legs just right or making sure your eyes are the same size and align perfectly, you can focus more on the basic idea of the body — where things go, how they work together, how they move.

In starting this way, you can take your time, slowly working to enhance your figure drawing skills. Below, Jeff Mellem demonstrates the fundamentals of drawing armatures, excerpted from his book, How to Draw People, and why starting this way leads to better figures down the line. Enjoy! 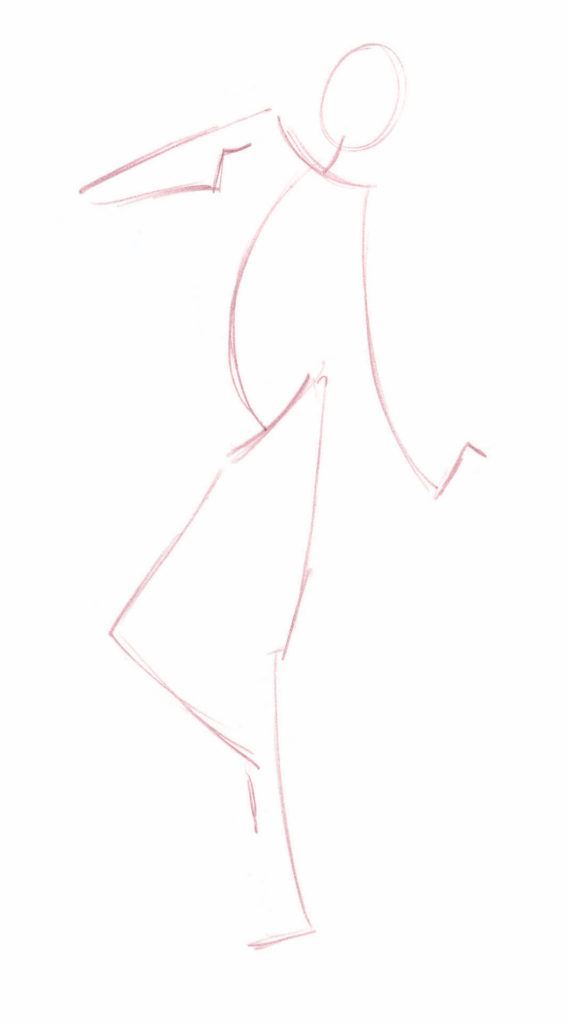 The best way to learn to draw the human figure is to start as simple as possible. Forget about tracing contours. Forget about shadows and values. And, forget about skin and bones and facial features.

What you need to do is boil the figure down to its essence, something so simple that it can be drawn quickly; something so clear that there’s no question about what it represents. When people who don’t know how to draw want to sketch a person, they often end up with a stick figure. That’s about as simple as you can get.

The problem with the standard stick figure is that it doesn’t possess the information on which to base a drawing. However, with a couple of additions and modifications, you can turn a simple stick figure into a foundation for a drawing.

If you take a stick figure and add some shoulders and hips, you get something that looks a lot more like a human than the usual stick figure. If you also add in some hands and feet and some bends at the elbows and knees, some volume to the head and keep all the parts roughly in proportion to a real person, you’ll end up with something that’s both easy to draw and recognizable as a human. In art, this simplified figure is called an armature.

Learning to draw armatures is a great place to start in figure drawing. You don’t have to worry about making the armature look like the person you’re drawing. Once you take away all the details, what you’re left with is a diagram of how someone is posed. By reducing the figure to this simple representation, you gain the power to analyze and exaggerate poses you see and invent poses you imagine.

Hold Off on The Gestures…For Now

One important note about drawing armatures: This is not gesture drawing. Gesture drawings are a better way to build a drawing because they show both the pose and the proportion of your figure (like an armature does), but they also give your drawing a rhythm and flow.

The armature is a more concrete, rigid system that hones your sense of proportion and is an easy and clear way to build a pose. Gesture drawing is an important skill to master. But for now, stick with the armature as a way to help you see beyond the surface of your subject.

Now let’s move on to a demonstration on drawing armatures.

The first step in drawing an armature is to draw an oval for the head. I start with the head because it establishes the proportion for the rest of the body. Pay particular attention to the angle at which the head tips to the left or right. 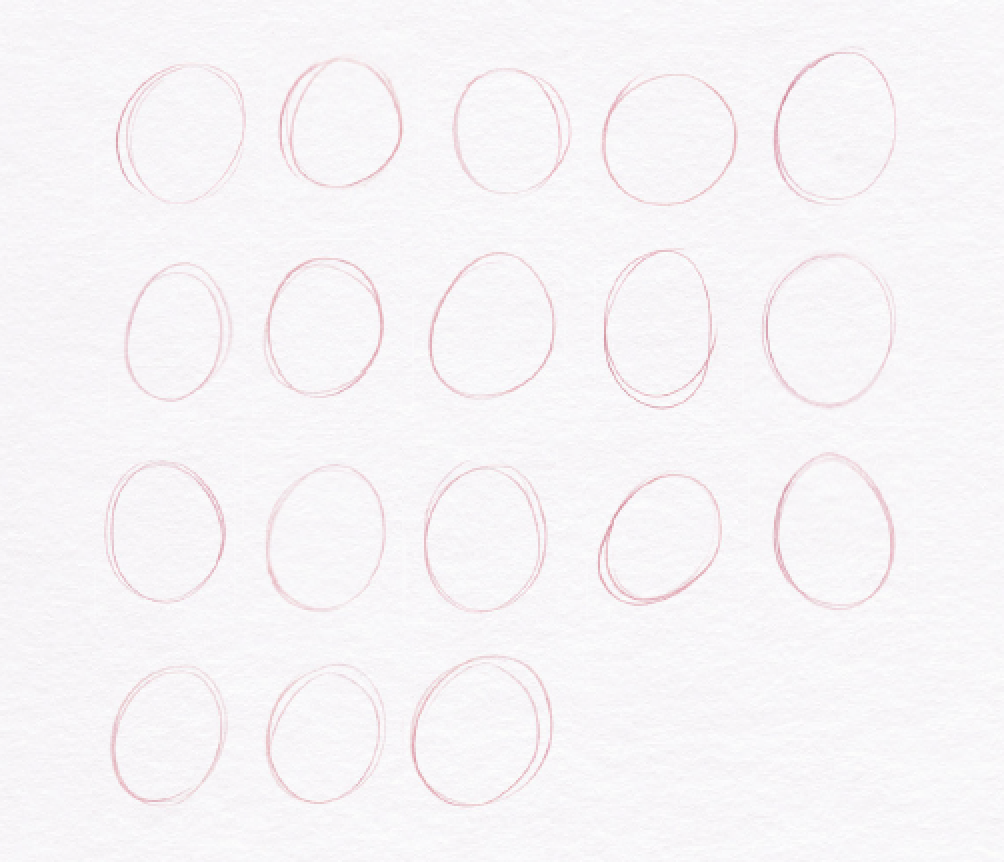 When you draw your oval, you don’t need to go around and around. Just draw an ellipse in single lines once around or so. It helps to practice drawing circles of various sizes and elongations until you can draw a simple oval shape consistently.

Now, you must define how the head is tipping forward or backward. You have to think of your shape as a sphere and not a flat circle. A sphere has three dimensions, where as a circle has only two. I know the page is flat and your circle only has two dimensions, but you can make it appear to have depth simply by wrapping a line around the sphere’s equator. 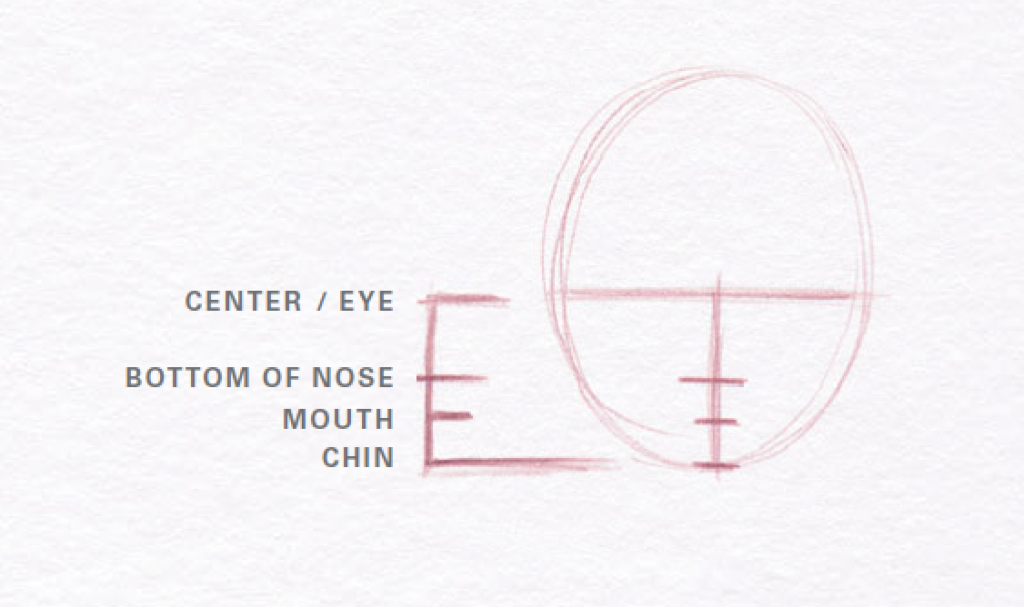 To see how this works in real life, wrap a rubber band around a ball or draw a line around the middle of a balloon. As you tip the ball or balloon away from you, the curve of the line appears to arch upward; if you tip it forward, the arch will appear to dip downward. 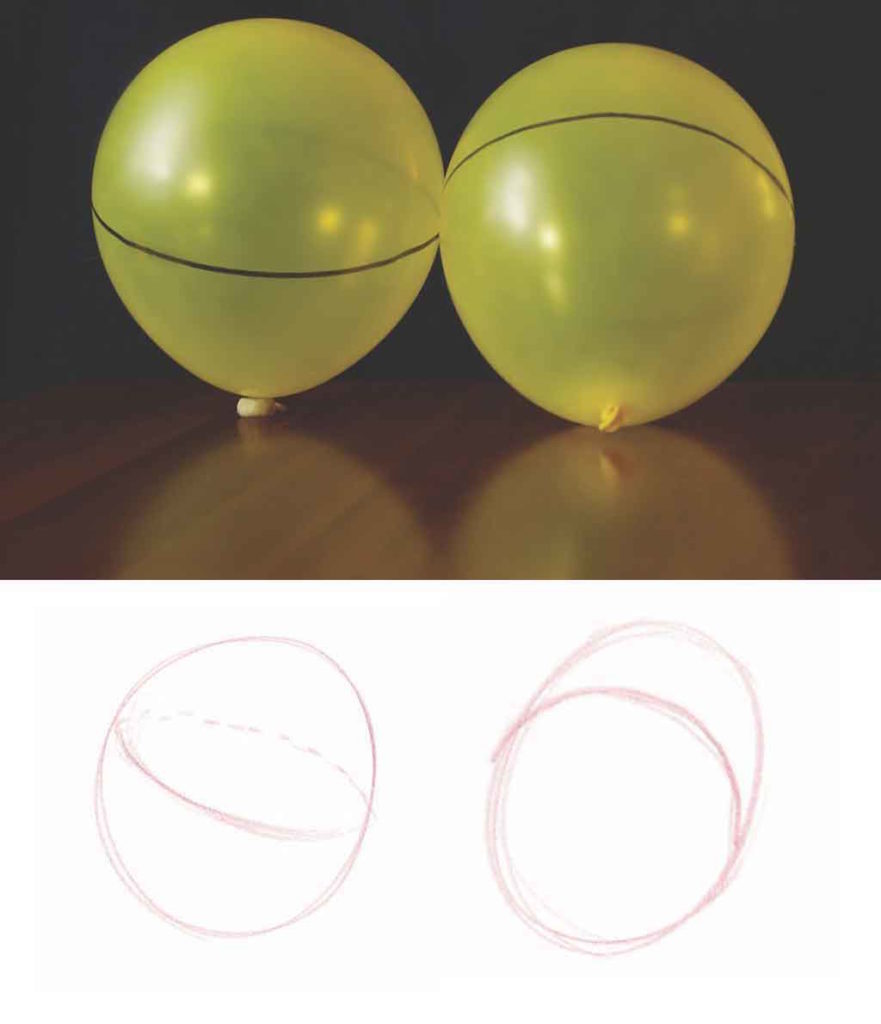 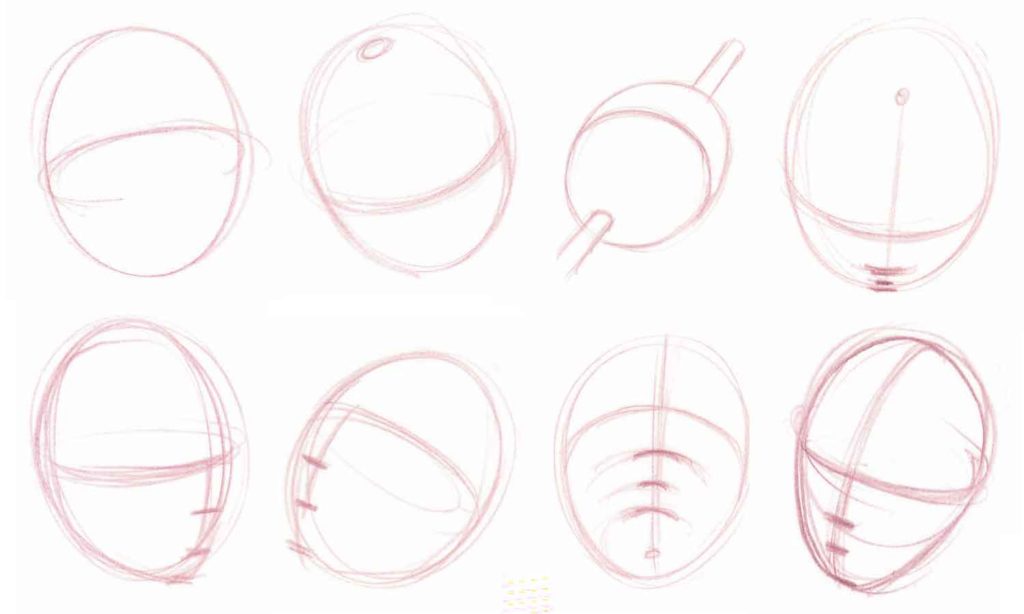 You will want to add a line for the neck. This line generally represents the spine. Don’t worry about anatomy yet; just have the line start at the back of the sphere opposite the face.

The neck bends and twists to a large degree, so be sure to give it some curvature. Even when a person is looking straight forward, you can see the natural curvature of the neck in profile. 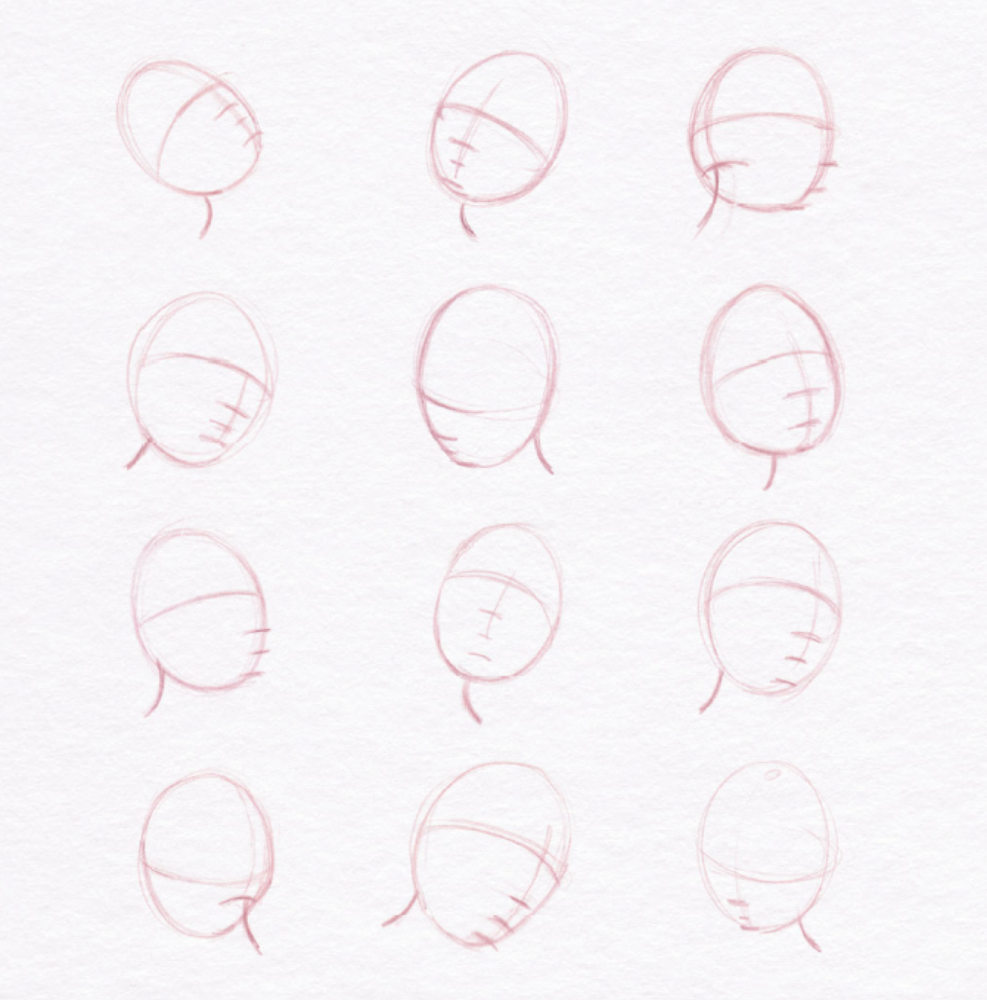 The next step is to work down the body to the feet. Draw a line that represents the torso. Like the neck, this line follows the general motion of the spine, but you’re not trying to draw the curves of the spine itself.

Don’t worry about the outer curve of the spine at the rib cage or the inner curve at the waist. You’re trying to capture the general movement of the torso down to the hips. 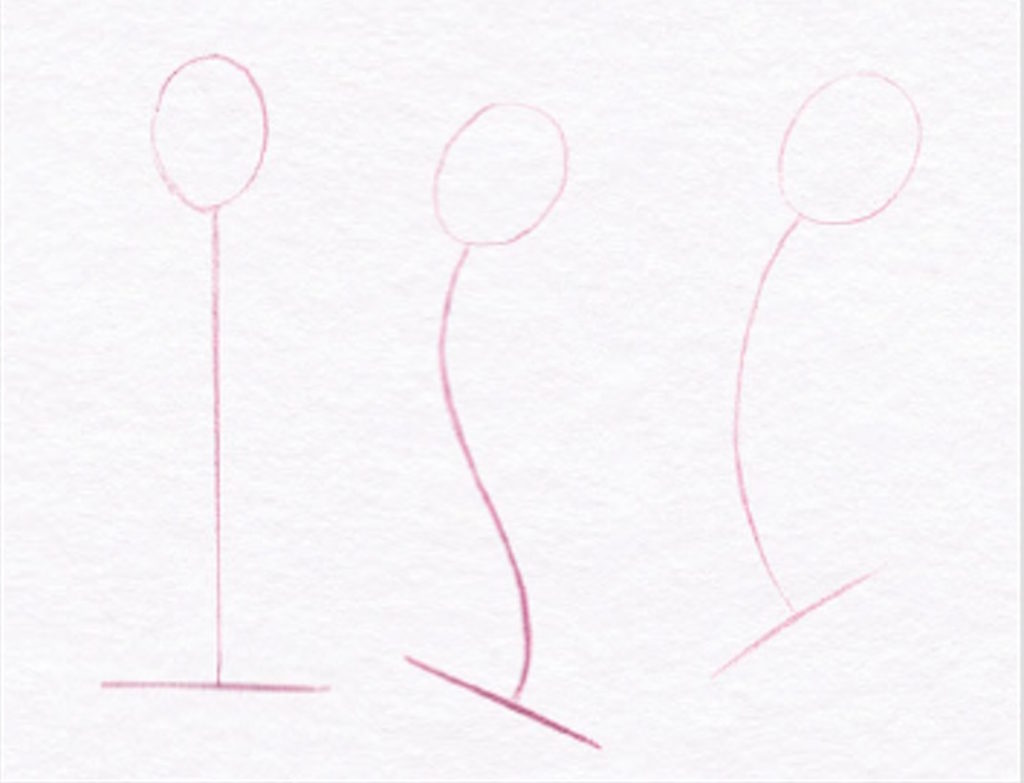 On the armature, the hips are represented by a straight line that is at a 90-degree angle from the base of the spine. This makes it easy to figure out how to draw the hip line. Once you’ve drawn the torso line, the hip line will be perpendicular to it.

Facing forward, the hips are wider than the head. But, as the body turns to the side, this line foreshortens and could be as small as a single point. 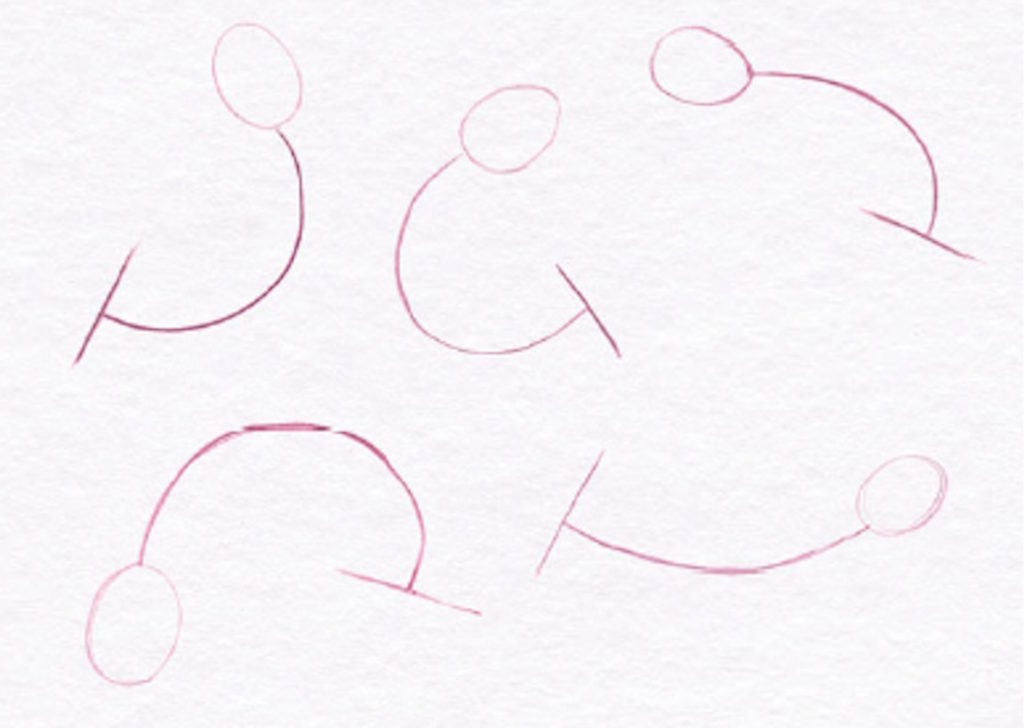 The legs should be about as long as the head, neck and torso combined (assuming the body isn’t foreshortened), bending at the middle for the knee. Add a simple line to indicate the direction of the feet and to anchor your figure on the ground. 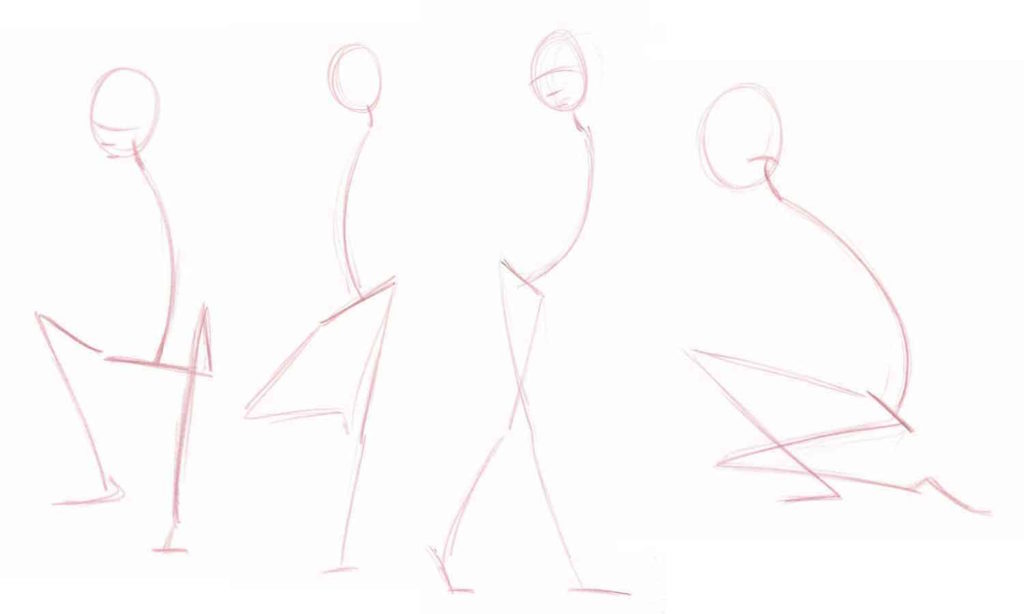 7. Draw the Shoulders and Arms

Each shoulder moves independently, so they aren’t represented by a straight line like the hips are. When the shoulders are shrugged or rotated forward, the shoulder line should reflect this with a curved line. 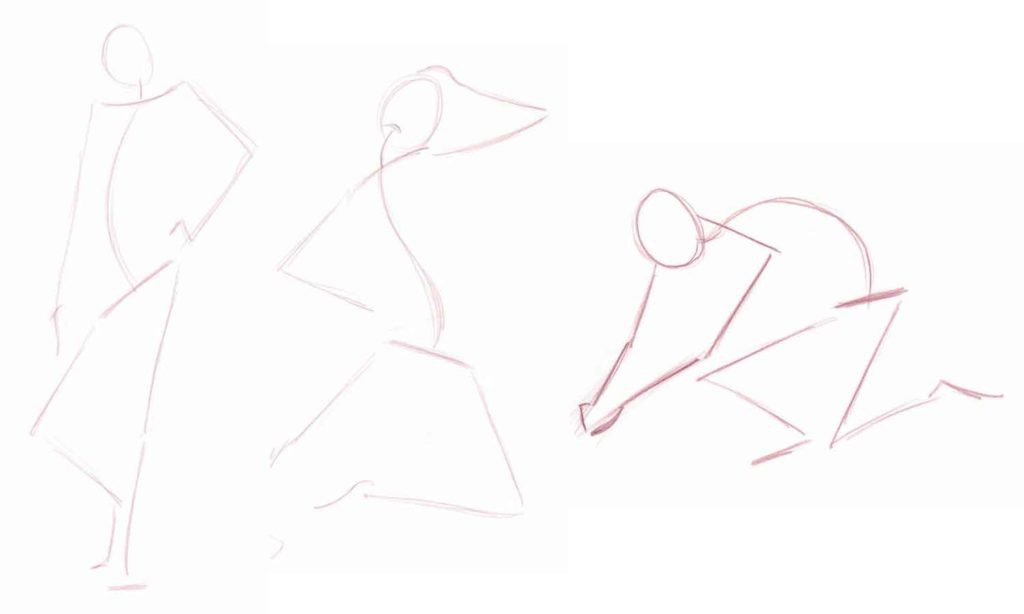 The shoulder line connects to the torso at a right angle, similar to the hips, but it curves up, down, forward or back as it moves away from the body, according to the pose. Add the arms and hand in a similar fashion to the legs and feet, only a little shorter.

Once you’re comfortable posing an armature, you’ll need to start paying attention to getting the proportion correct. Every person is a little bit different. Some people have long legs and a short torso. Other people might have long arms or wide shoulders or a squat head, so you have a lot of leeway in drawing these things.

That said, the classical proportion of an adult is roughly seven-and-a-half heads tall. The top of the head to the pubic area is four heads high. The legs are about three-and-a-half head lengths tall, but many people stretch them to a more statuesque four heads.

A great way to practice the armature is to give it something to do. This armature is hoisting a heavy sack onto his shoulder.

In each of the drawings, I had to consider how he would move and how he would stay balanced. It helps to act out the motion yourself before getting your armature to do the same motion on the page. 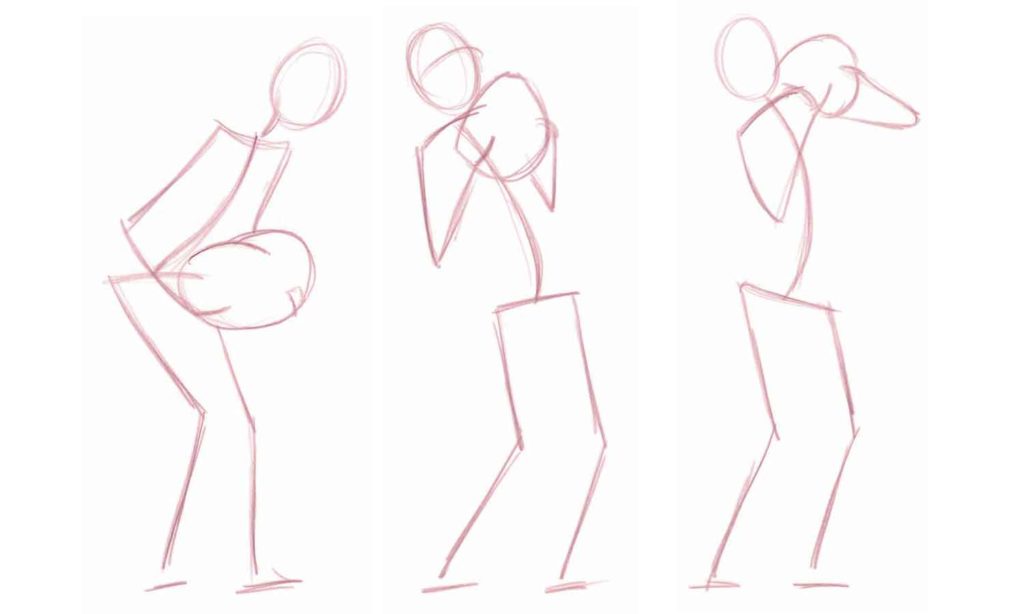 Exercise: Stop here and choose one of the armatures you drew from a reference. Picture in your mind the motion the person was going through when that image was captured. Act it out if you can. Now try to draw armatures that animate the motion before and after the moment you drew in the picture.

Armatures are good for analyzing the pose and clearly defining how the body is positioned. The biggest shortcoming of beginning a drawing with an armature is that it is rigid and slow to get down on paper. Gesture drawing is an even quicker way to convey the movement and flow of a pose while still clearly showing how the body is positioned. You need the skills of armature drawing even though you’re not actually putting it down on paper.

Gesture drawing isn’t about drawing a skeletal structure or the body’s contours; it’s about capturing the totality of the pose as one fluid drawing. That means you may mark the twist of the spine or the outside curve of the hips, but you’re not thinking about those individual pieces as much as you are trying to capture the energy of the total pose. It still needs to give you all the positional information that the armature did, but it also needs to give you a feeling for the whole subject — not just how everything fits together but also the attitude and energy of the person you’re drawing. 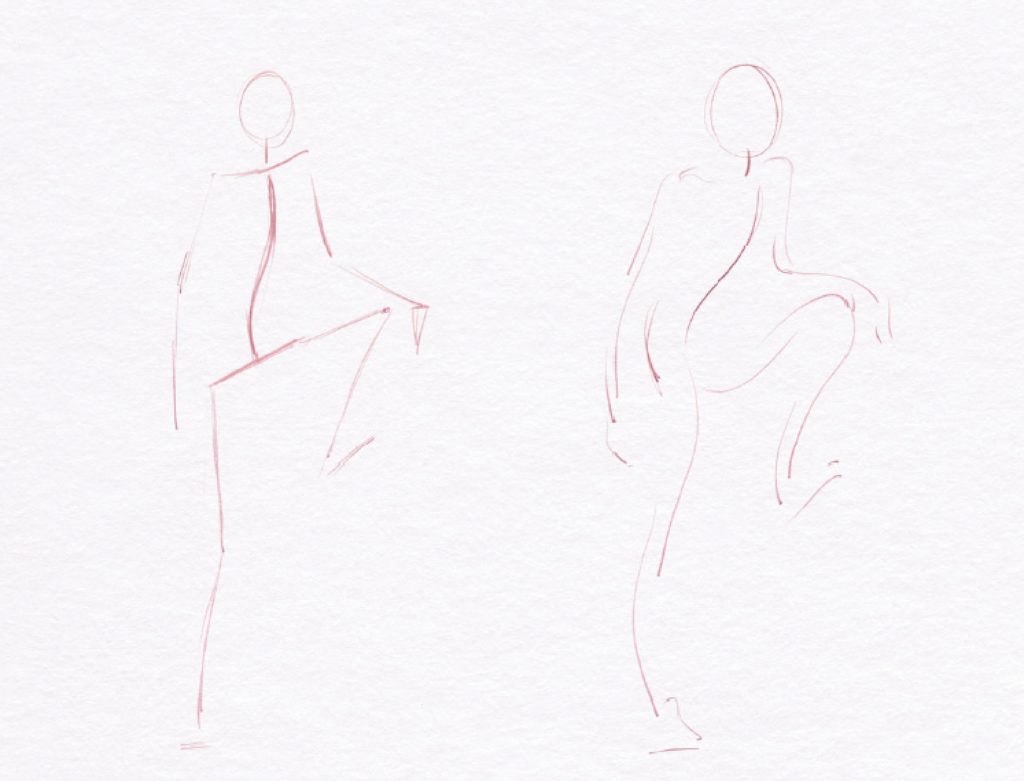 You can see the difference between the armature and the gesture in these two drawings of the same pose. Both show how the body is positioned and the proportion of the figure, but the gesture gives a sense of rhythm and flow. You may use a dark line to emphasize the stretch at the hip or the twist through the torso and lighter, smoother lines on a relaxed arm.

These initial observations, recorded in your gesture drawing, will come through as the drawing develops and help to keep the energy and emotion through to the final rendering.

And, Josh Mellem’s How to Draw People covers it all, with step-by-step lessons, exercises and assignments along the way. Get your copy here!

One thought on “Start with Armatures When Learning to Draw Figures”