Editor’s note: I’ve always found the film star Bill Murray to be funny. I don’t spend a lot of time in front of the TV/movie screen, but over the years I’ve seen some of his movies, and they’ve always made me laugh. But I never spent another thought on why he’s funny, or how he goes from eating breakfast in the morning to acting in front of a camera. That was until I read a quote from him about acting, which I think applies to those of us in creative roles: “I think that good actors always–or if you’re being good, anyway–you’re making it better than the script. That’s your … job. It’s like, ‘Okay, the script says this? Well, watch this.’ Let’s just roar a little bit. Let’s see how high we can go.”

When I read Johannes Vloothuis’s blog post about using a photo reference, Murray’s quote once again came to mind. Just because you have a place to start doesn’t mean you have to finish in the exact same spot. Run with it. Use your photo reference and then go higher. ~Cherie

Compare and Learn: 3 Plein Air Paintings and Their Photo References

In the previous post I gave some insight on the pitfalls of plein air painting. Here are some finished paintings that were done outdoors and the photos of the scenes next to them. Read on to see what was going on in my mind to escape the some typical traps one can encounter if a landscape scene is painted at face value. 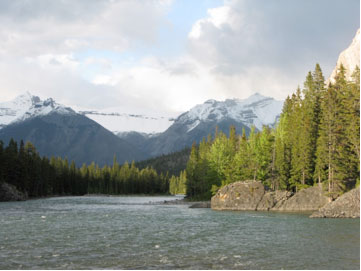 In this photo reference (above), the two mountains are competing for attention due to the similarity in size. The evergreen trees are monochromatic and the value of their highlights is the same in all the planes. The rocks are a dull muddy gray and some are symmetrical. The mountains are too close so they don’t look atmospheric enough. The very distant patch of trees forms a triangle. 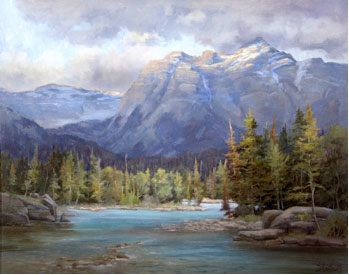 The success in a painting is conveying a mood, not the detail. After a couple of hours during my plein air session, I caught the glow from the warm afternoon sunlight on the mountain peak. I stopped working on any other area before I would lose it and depicted that effect. The light lasted about 10 minutes, and it never came back.

In the painting you can clearly see the separation of planes. By making one plane lighter than another, you send a message to the viewer that they are separate. I took advantage of the sunlight bouncing off the water to create a center of interest. I designed the rocks to be more appealing abstract shapes. 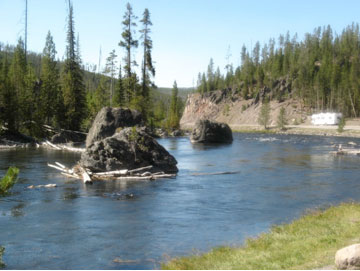 All the foliage is the same value in this reference photo. There are two obviously cloned evergreens. Visually implied clones in nature are quite frequent. Again, the rocks are a dull gray and symmetrical. The water is flat in value, showing almost no movement. There is a floating tree trunk pointing away from where I would want the viewer to travel visually. The patch of grass in the corner is flat and forms a triangle. 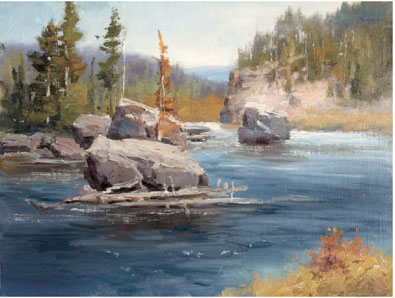 I applied much more color variances to the foliage in the painting. I clearly separated the planes by adding violet to my mixtures in the more distant planes, as well as lighten the dark values of the forest in the background. The rocks are better designed and have subtle variances of color. I removed the irrelevant tree trunk.Viewers prefer warm color, so the orange evergreen trees add a nice warm touch. The water has wavelets to indicate a current and its gradient plane conveys depth. 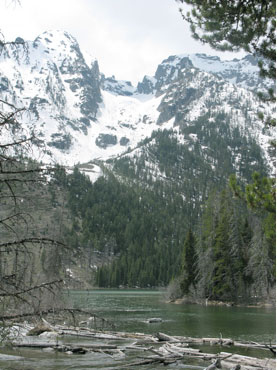 The scene in this landscape photo reference had a lot of clutter. Mother Nature reminds me of the TV program “Hoarders.” She loves to accumulate all kinds of possessions and never tidies up. While setting up my gear, I told myself that I had to use my huge mental broom and vacuum cleaner to get rid of all the junk. The fallen tree trunks are making the foreground busy. Again, if I paint the evergreens as I see them in nature, I will not show the distinct planes. There’s not enough atmosphere in the mountain.

On the other hand, however, nature will give you jewels to work with. The mountain lines and shapes are beautiful as is, so I was able to replicate them. There is a nice eye movement formed by the snow and the evergreen forest that leads all the way up to the mountain. Just before I started the painting, I made a mental note to exploit the shimmer of light on the water. 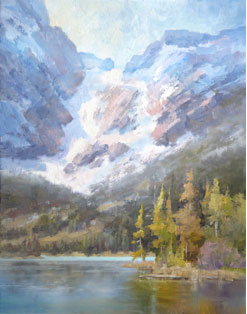 In the painting, I added a warm glow to the sides of the cliffs but left the farthest one cool, so it would appear to recede into the distance. I respected the linear path on the mountain. You can clearly see the separation of planes. The glistening area of water behind the first row of trees is very inviting to the viewer. The melodic line at the base of the back evergreen forest is pleasing.