Often, when viewing an exhibition of prints, we’ll look at the labels and discover the names of printing media we don’t fully understand. What’s the difference between a drypoint and an aquatint? Between a monotype and a monoprint? Between a lithograph and a linocut?

For starters, there are four traditional printmaking categories: relief (which includes such processes as woodcut and linocut), planography (lithography), serigraphy (silkscreen) and, finally, intaglio.

Below, artist Richard Pantell walks us through the last of these categories, intaglio, and its five principle processes. Enjoy!

Originating in Italy, the word “intaglio,” with a silent “g,” refers to prints made from plates in which the areas that carry the ink are recessed below the surface of the plate. The plates are most often made of copper, but zinc, brass and other materials are also used.

The method of creating the recessed areas differs with the technique, and in a moment we’ll learn how each one works. But once the plate itself is complete, all five processes share the following steps to produce the finished intaglio print.

First, the artist applies ink to the entire surface of the finished plate, often using a roller. The ink is then squeegeed across the plate, forcing the ink into every recessed line and area. The plate is then wiped with a rag called a tarlatan. This removes the ink from the raised portions of the plate, leaving only the ink in the recessed areas to be printed.

The plate is then placed onto the bed of an etching press, a rectangular steel slab. A dampened sheet of etching paper, larger than the plate itself, is laid on top. Two felt blankets are placed on top of the paper.

The bed is then cranked between two steel rollers, pressing the blankets into the softened paper and forcing the paper down into the recessed areas of the metal plate, where it grabs the ink. After the bed comes to rest at the other end of the press, the blankets are lifted off. The paper is removed to reveal the finished print, or impression.

The look of the final print is affected by numerous factors, including the choice of ink, the method of wiping the ink from the plate and the choice of paper — in addition to the choice of printmaking process and the artist’s treatment of the image. The contours of the plate leave an embossment on the paper called the platemark, and the residual ink on the surface is called plate tone.

Prints are usually worked through an evolution called states, with the artist printing a sample impression, then working the plate further until it is completed, when the final proof is taken. At that point the plate is ready for editioning — the creation of multiple impressions, which the artist signs and numbers.

There are five traditional intaglio processes: engraving, etching, drypoint, aquatint and mezzotint. Each produces prints with a distinct look and feel, and many prints are created through a combination of two or more of these processes.

Engraving was developed in the Middle Ages, making it one of the oldest printmaking processes. The artist creates lines by cutting into the copper plate using a tool called a burin. It requires patience, strength and practice.

Curved lines are created not by pushing the burin in a new direction, but by turning the plate while pushing the burin straight ahead. It is a highly linear process, and shading is accomplished largely through hatching and crosshatching.

Burins are available in several sizes, but even a single burin will give the engraver great control over the line. The tip of the burin is diamond-shaped. As the pointed tip is pushed deeper into the copper, the line becomes wider.

As the cut finishes, the line becomes thinner, much like the line of a crow-quill pen. Engravers create much of their tone using this thin-to-thick-to-thin approach.

Etching dates back to the early 1500s. Traditional etching is still practiced today, as are a large number of derivative techniques developed since then. In sharp contrast to the painstaking medium of engraving, etching is very fluid and spontaneous.

At the start of the process, the metal plate is coated with a thin layer of an asphaltum-based, acid-resistant substance called etching ground. Using an etching needle, the artist draws lines through the ground, exposing the metal. The plate is then lowered into a mild acid bath where the exposed areas are etched, or bitten, by the acid, leaving them recessed beneath the surface of the plate.

The longer the plate is left in the acid, the more metal is eaten away, resulting in deeper and darker lines. Multiple bites are often used to create a variety of line thicknesses. Unlike an engraved line, an etched line generally maintains the same thickness from start to finish.

Like etching, drypoint involves fluid and spontaneous drawing. Unlike etching, it does not involve acid. Used since the early 1600s, the technique involves scratching the image directly onto the surface of the plate with an etching needle or a diamond-pointed needle.

As the needle makes a shallow mark beneath the surface of the plate, it also raises a thin ridge of metal called a burr. The burr holds most of the ink, rather than the recessed line itself.

Drypoint produces a warm, soft line with a small amount of ink reaching away from the line. Drypoint lines, like engraved lines, range from thin to thick to thin again, but they possess a softness not found in engraving.

Due to friction from wiping the plate, burrs break down quickly and can only be pressed a few times. To enable the printing of a large edition, the artist must employ a process called steel facing to make the surface of the plate more permanent.

Aquatint, developed in the 1600s, is actually a variation on etching. However, it is used to such a high degree and includes so many variations of its own that it is widely considered its own medium.

It differs from line etching in being primarily a tonal process, somewhat similar to commercial halftone printing, which uses small dots to create tones. In the case of aquatint, tone is created by small, nearly microscopic light dots within the dark field. Aquatints are often combined with traditional line etching or other etching techniques.

The artist begins an aquatint by dusting the plate with fine rosin powder. The plate is heated until the powder melts into droplets that adhere to the plate. These droplets are acid-resistant and protect small, relatively evenly distributed dots on the plate when it is lowered into the acid bath. When the plate is printed, this results in tiny light dots within fields of ink, which our eye reads as even tone.

To craft the image, before submerging the plate into the acid the artist paints the areas where no tone is desired with an acid-resistant substance called asphaltum, or stop-out. The plate is then submerged into acid and bitten.

The longer it is left in the acid, the deeper and darker the resulting tone. The plate is removed from the acid, rinsed in water and dried. In most cases, the artist then repeats the process, painting more areas with stop-out to preserve them at the current tone, and then re-submerging the plate in acid, producing still darker tones in the unprotected areas.

Mezzotint has a known inventor: Ludwig von Siegen (1609–ca. 1680), of Amsterdam, who developed the process in the 1640s. It is the only intaglio process that is worked entirely from dark to light. It produces unique velvety tones that can appear quite painterly.

The artist begins by preparing the metal plate to print as an even dark field. This is done through a tool called a rocker, which has a handle on the top and a curved, serrated metal bottom containing teeth.

The artist creates the image using a selection of metal tools called burnishers and scrapers to smoothen the textured plate. Burnishers can be used for everything from soft tones to sharp lines and edges. Areas that are burnished more retain less ink during printing and vice versa.

This article first appeared in a past issue of Drawing magazine. You can peruse through past issues here. 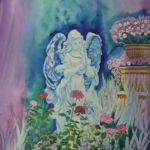 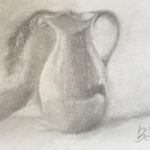