Learn to Draw by Putting Things into Perspective

We’ve probably all heard (or even uttered) the phrase, “That really puts things into perspective.” Perspective is all about relativity; when you pull back and look at the larger picture and take a different view, maybe things aren’t so bad, or maybe there’s a solution where it seemed like there wasn’t before. Drawing with perspective will help you understand the big picture of your work and perspective drawing for beginners is much easier than you think. 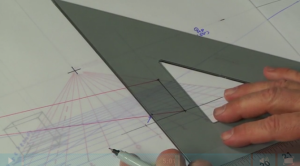 In the art world, perspective is about your point of view,  only this time, it’s more spatial. When you learn to draw perspective as a beginner, you learn it’s importance. It’s all about how you look at the world, and that’s exactly what Patrick Connors teaches in his video, The Artist’s Guide to Perspective.

In Guide to Perspective Part 1, Connors shares lessons on perspective drawing for beginners and shows you how to see objects in a different way. In Part 2, Connors demonstrates how to draw one- and two-point perspective; then, he applies those drawing techniques to complete a still life, step-by-step.

Learn perspective drawing for beginners from the guided video below. Follow along to learn techniques from Thomas Schaller with guidance from Patrick Connors.

Why Perspective and Perception Go Hand-in-Hand

Although the fundamentals of perspective drawing seem to be rather straight to the point, the possibilities of how you can apply perspective in your art are vast. In fact, perspective is nearly synonymous with perception.

What I mean by this is you can use the principles of perspective drawing for beginners to create your own perception of the world through your art. You have the power of illusion literally at your fingertips. You can alter how your art is perceived—all by just conquering the basics of perspective drawing. How empowering is that?

If you are thinking, “OK, that all sounds great, but how can I learn how to draw in perspective?” Well, to start, let’s go over a few key terms you should know before delving into perspective drawing for beginners pulled from the book, Perspective for The Absolute Beginner, by Mark and Mary Willenbrink.

The horizon is the line for which the sky meets the land or water below. The height of the horizon will affect the placement of the vanishing point(s) as well as the scene’s eye level.

The orthogonal lines are lines which are directed to a vanishing point; the parallel lines of railroad tracks, for example. The word “orthogonal” actually means right angle. It refers to right angles formed by lines such as the corner of a cube shown in perspective. 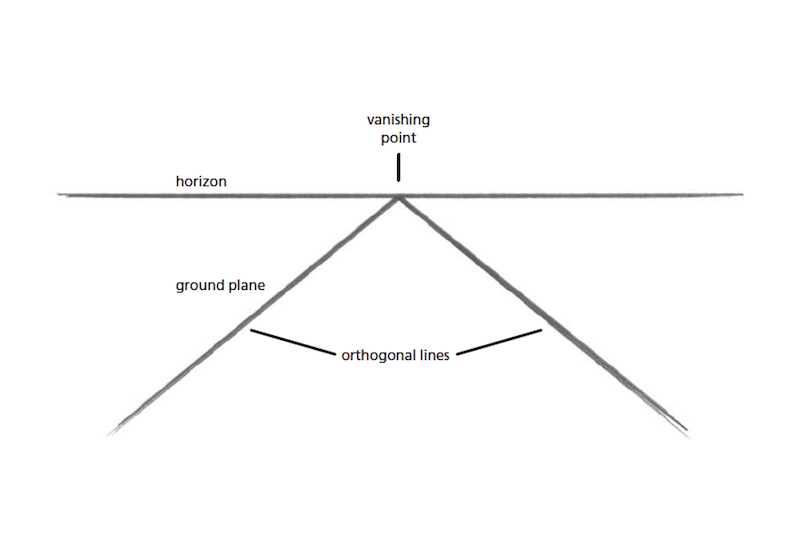 Atmospheric perspective, also called aerial perspective, conveys depth through variations of values (lights and darks), colors and clarity of elements. Foreground elements in a composition have greater value contrasts, more intense colors and greater definition of details. With distance, the values and colors become neutral, the details are less defined and the elements take on a dull blue-gray appearance.

Atmospheric perspective occurs when particles in the air, such as water vapor and smog, affect what is seen. Forms viewed from a distance are not as defined and have less contrast because there are more particles in the atmosphere between the forms and the viewer. Likewise, the wavelengths of color are affected by distance. Blues bounce around, whereas the longer color wavelengths are not affected by particles in the same way. The result is that the blues remain more visible than the other colors in the spectrum.

The values are the lights and darks of a composition. Intrinsic to atmospheric perspective, values can influence the impression of depth in a scene. Highly contrasting values tend to appear forward of values with little contrast.

The lighting of a scene affects shadows and values of forms. It can also affect how those forms are perceived.

When drawing, depth can be expressed through both linear and atmospheric perspective as well as through the use of color. Combining all three will produce optimal results.

Now that the basics have been covered, here’s a fun step-by-step demonstration on perspective drawing, which plays into the power of illusion. This tutorial involves sketching squares with lines that recede to a single vanishing point. The depth in the finished drawing is implied through linear perspective and the use of values.

Materials needed to complete this demonstration:

Continue adding lines that converge at the vanishing point.

Step 4: Trace or Transfer the Image

Use a 2B pencil to lightly trace or transfer the structural sketch onto a sheet of 8” x 8” (20cm x 20cm) drawing paper. Leave out any unwanted lines.

Add the lighter values with a 2B pencil. Make the values darker as the internal forms recede.

Add the middle values. Continue to darken the tunnel-like forms as they recede into the distance.

Add more darks and details with 2B and 4B pencils. Lighten any areas with a kneaded eraser, if needed.

Because your artwork is a unique expression of yourself, sign and date each drawing. This will give you a sense of accomplishment and also help you to track the progression of your artistic skills.

Want to Know More About Perspective Drawing for Beginners?

Adding perspective to the beginning stages of your learning process will help you develop a deep understanding of form and its relationship to space. Take your new perspective drawing knowledge and build your skills with  inspiration from Patrick Connors‘ landscape paintings. Or, check out 11 more tips on how to draw with perspective, here. 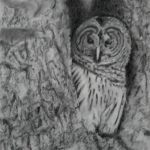 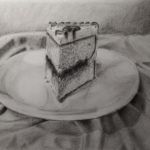 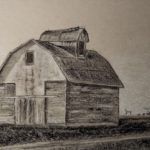 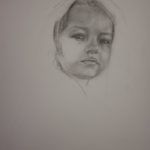 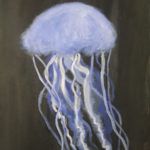 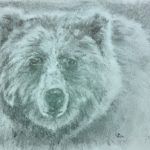